It was the largest Silent Dinner Party to date with 40 or so people in the room. Most definitely one of the more passionate dinner parties I’ve ever been to.

In the lead up, I sensed more anxiety around the concept than I have experienced before, but simultaneously there was an overwhelming curiosity and playful approach.

The cooking was a fantastic experience. I learnt some traditional and contemporary Lebanese methods and recipes from Firas, an inspiring individual who studied conflict resolution and has chosen to use food as his medium. Perfect. Dei also contributed a couple of her spectacular and serendipitous dishes.

There was heaps of laughter and many who sat peacefully in it.  People playing games, and there were tears as well. After the dinner party, one lady commented that as she is a shy person, she usually feels detached from the group in environments like this, however in Silence she felt that she could be be completely herself and feel much more a part of the group. Beautiful!

It was lively and the noise levels were pretty high, but there were a lot of people, and for the first time ever we had a bar where people had to purchase their drinks as opposed to BYO. The Bar tenders were amazing, and Firas (the bartender not the cook) embraced the concept, saying that he regularly has days of Silence himself in the throws of his life. Wikid! I do however think there was quite a bit of whispering happening at the bar, it can be hard to communicate Rose Wine without words if there is nothing pink around to point at, as participant Marie Bassil confessed later!

We had vocal interventions with one lady shouting across the table “what is the purpose?” “We are humans we are not Silent” !! She also tried to read a book. That was the first time I’ve ever actively tried to stop something happening at a silent dinner party. Dei and Zico took the book off her and wrapped it in masking tape, the object that came of it was beautiful!  It was a very strong response, I quite liked, the only thing I don’t understand is why she chose to interrupt the silence like that when she had consciously agreed to come along and experience it.  Some of the other guests found is disruptive and she persisted in taking even after people asked her to ssshhh. She was screaming thoughts at me and I was gesturing to her to let it all out, she understood, and said to me “Let my anger out?”, to which I nodded. The lady I’m talking about : if you are reading this, please do get in touch, I’d really like to talk to you about it but I have no idea who you are!! Email me!! Anyone from the event who I have not been in email contact with, please drop me a line, I’d love to hear about your experience. 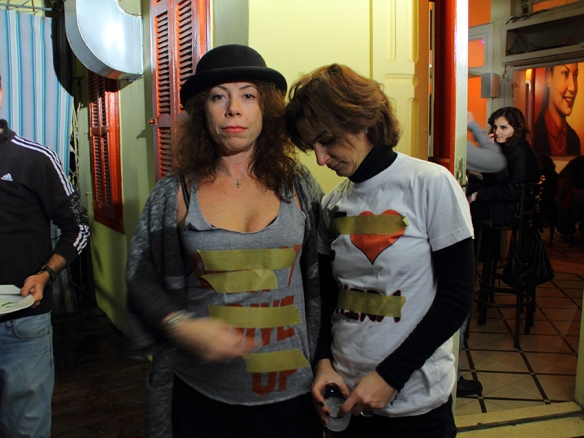 My biggest thanks to all who helped make it happen, Dei El-Ayoubi, Patrick Mitri, Owen Ryan, the amazing Good Food bonanzas from Firas Abi Ghanem, Zico and all at Zico House x x x x