In November 2015, The Silent Dinners were a part of a group exhibition at the Goethe Institut Barcelona, called Utopian Tomorrow, curated by Herman B. Mendolicchio. It was held in a private house in the centre of Barcelona, a dinner of 25 people and the silence lasted for the 2 requested hours before the host/home owner spoke, allowing her gusts to do the same. The menu was a seasonal banquet prepared in collaboration with local food enthusiast Alberto Bellini. The beginning of the evening was surreal, as people received their glass of champagne on arrival, and then lounged around on the deck in the cool winter air, opening up their perceptions to other ways of encountering, while munching on carrot sticks and fresh hummus. In itself like a Vanessa Beecroft arrangement of bodies in space, staying silently to themselves.

The evening had huge swings in energy, but all the while was an intense experience. The group went from extroverted games and table top walking, to long endured eye contact sessions, sitting, engaging, holding, each other in a still and felt exchange.

The piece is aptly presented under the title Utopian Tomorrow, in itself an exercise in alternate models for living, questioning what we can do with real-physical space encounters in todays digital era. As a means of dropping fast judgement patterns and exercising tolerance, the political implications of eating together in silence are profound. And here in Barcelona, I felt those implications closer and more tangible as realities then ever before. Things are moving. People attitudes to mindful practice are changing, and in the digital snowstorm around us, we are increasingly happy to disconnect in order to connect.

“There is a world made of no words, silence, full-bodied glances, heartbeats, veiled shyness, intrepid movements, fast imagination, and alternative empathies. The Silent Dinner is the door to access these inner layers we tend to neglect.”

Herman B. Mendolicchio. Curator of A Silent Dinner in Barcelona, with the exhibition ‘Utopian Tomorrow’ in Barcelona, 2015 supported by the Goethe Institute Spain. 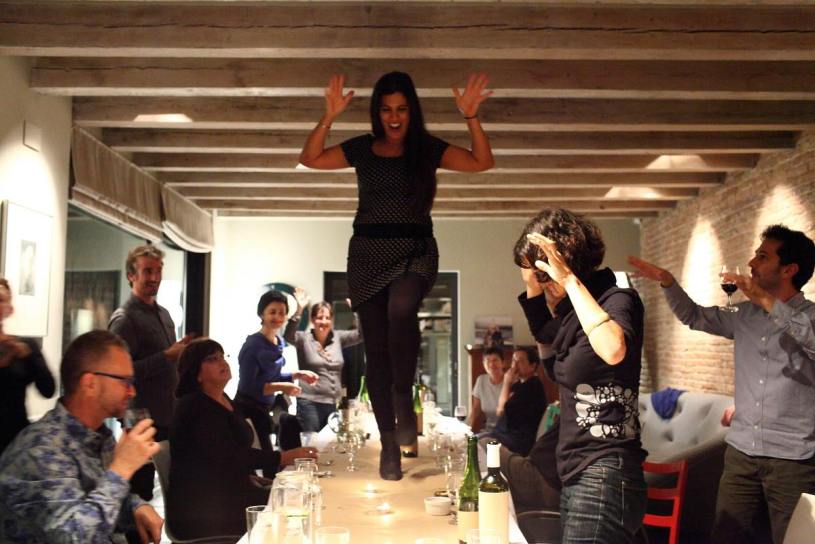