A Silent Dinner Party in Edinburgh, during the Fringe Festival, with the Shanghai Repertory Theatre!

During August 2011 I spent time working with the Shanghai Repertory Theatre on their mount of the play Drift at the Edinburgh Fringe Festival.  7 of us were bunked up in a 2 bedroom flat on Morningside, and the other half of the company were just as snuggly in a dwelling around the corner. Living in this close a proximity with your work buddies can be a noisy affair, and with so many languages being spoken around the house it was a ripe environment for a Silent Dinner. The company agreed! Bring it on…

My experience with actors at SDPs in the past is that they tend to mouth words, which surprises me as I would have thought that they would be some of the most qualified people to communicate with their bodies. It has been suggested by fellow actors since that perhaps it is a need in the character to be completely understood that may breed this repetitive behaviour, but either way, I had never done one with a room full of actors, so I saddled up, wrote a menu, laid a scarf on the floor of the kitchen in lieu of a table big enough for the 12 guests, and cooked up a storm with the fantastic Spanish influence of the company’s AV tech, the wonderful Silvia Alvaro . Of the 12, only three of us were not actors, myself, Silvia and ShuTing the show’s lighting designer.

It was indeed a theatrical affair with many little performances happening around the scarf (our makeshift table), and melodramatic exchanges indicative of the intimacy actors share after long runs of a show. The body language between the group was at once exaggerated and yet full of the subtlety and knowing resulting from the closeness of the relationships and expanded encounters people have with each other in the process of developing a piece of theatre.

The ending was without edges. I have never experienced such a fluid return to words than in this manifestation. People began to talk, and the others ignored them, asked them to quiet and returned to their silent state. Even after poeple had answered phones and left with verbal hugs, those who remained, remained in silence. Eventually the drunken last few, still without talking, turned the music on and danced around the scarf, twirling together without words but with harmony. 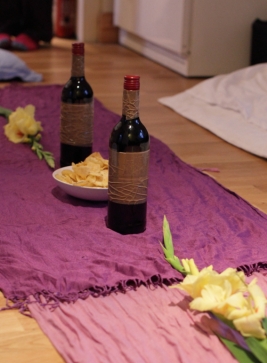 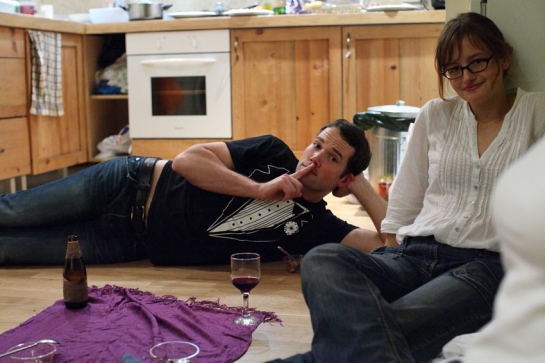 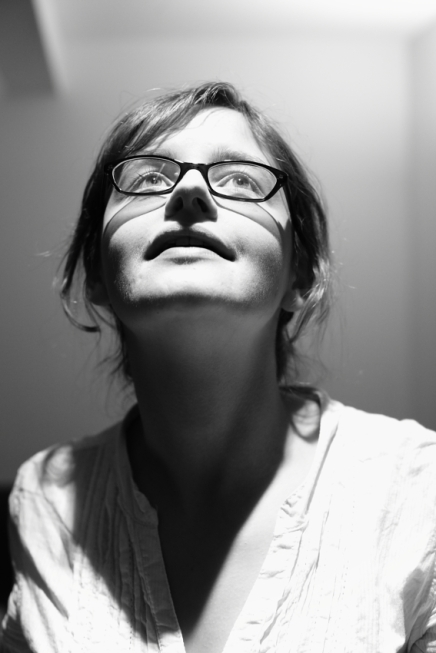 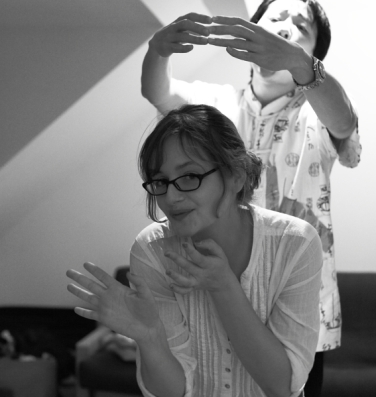 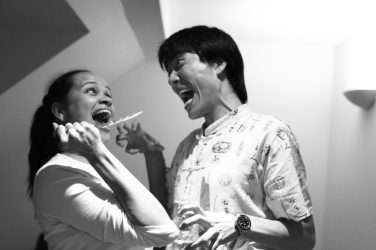